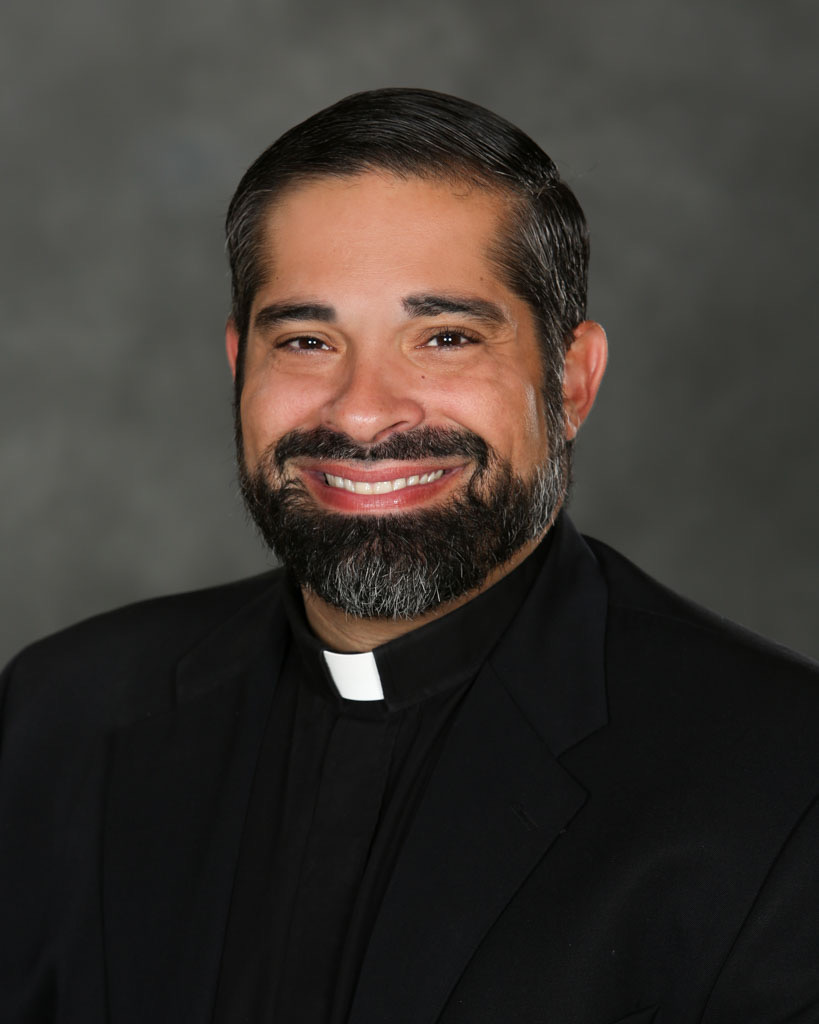 Father Prevas is the presiding priest of Saint Nicholas since September 2015.

His home community of the Dormition of the Theotokos was home to over 1,300 stewards. This parish is remarkable for so many events and wonderful ministries of our Archdiocese, but none more noteworthy than Father Prevas is the 43rd young man to be ordained to the Holy Priesthood out of this one faithful Parish, located on Chicago’s west side.

In September of 1997, Father Prevas enrolled at Hellenic College as a junior in the Religious Studies program. After two years of study, he received his Bachelor of Arts degree, with highest distinction. Upon graduation, Father was accepted into the Holy Cross Greek Orthodox School of Theology, where he studied for three years and received his Master’s of Divinity degree, again with highest distinction. During these years, Father and his wife Presvytera Matia were married on June 24th, 2001. After his marriage, Father received the blessing of His Eminence Archbishop Demetrios of America to be ordained to the Holy Diaconate, which took place on March 17th 2002 by His Eminence Metropolitan Iakovos (of blessed memory) of Chicago. The culmination of these blessed events led Father Prevas to his graduation from Holy Cross Greek Orthodox School of Theology in May 2002.

Following his graduation from Holy Cross in May 2002, Father and Presvytera Matia set off to Chicago to serve the Parish of Saints Peter and Paul in Glenview, IL. After two months of serving as a deacon, he was ordained to the Holy Priesthood, once again by Metropolitan Iakovos (of blessed memory), on September 29th, 2002. During their two-year ministry in Glenview, they were blessed to have their first son Kosta.

In July of 2004, His Eminence Metropolitan Anthony (of blessed memory) called Father Prevas to begin a new chapter in his ministry, to serve the people of God at the Resurrection Parish in Castro Valley, CA. During their 11 year ministry in Castro Valley, Father and Presvytera were blessed to have 3 children.

Father Prevas is currently the head Pastor at Saint Nicholas Church. He and his wife Matia have 4 children, Kosta, Niko, Yioryia and Yianni. 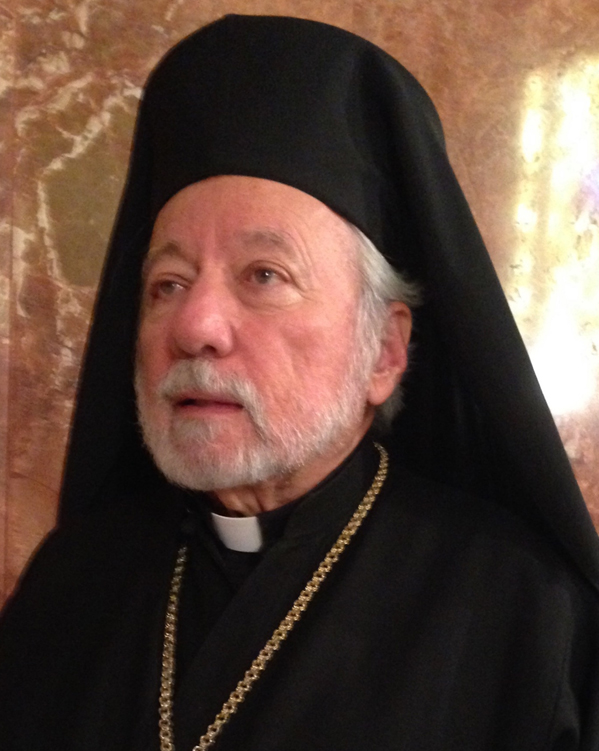 His Grace Bishop Spyridon of Amastris

His Grace Bishop Spyridon of Amastris served Saint Nicholas faithfully from 1960-2004. He is our Pastor Emeritus. 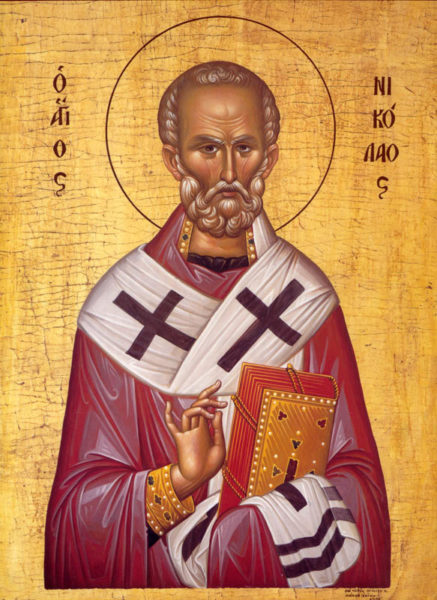 Our Holy Father Nicholas, emulator of the Apostles and ardent imitator of the Lord Jesus Christ, appears as a living pillar of the Church, zealous in defense of the faith and a model of pastoral solicitude for holy bishops. Through his countless miracles on behalf of the poor, the abandoned, of those suffering injustice and of all who call upon his fatherly protection, he has to this day shown himself “a good steward of the manifold grace of God” (I Peter 4:10).

Saint Nicholas was born in Patara in Lycia towards the end of the third century, to Christian parents who had long been childless. From infancy, he showed his love of virtue and his zeal for observing the ordinances of the Church by abstaining from his mother’s breast on Wednesdays and Fridays until the evening. Pious and inclined to silence, he was educated in theology and, while still young, was ordained priest by his uncle, Archbishop Nicholas. For many years, vigil, fasting and prayer were the virtues he excelled in, but from the time of his parents’ death and his giving away his inheritance to the needy, the virtue of almsgiving became his greatest glory to God. He regarded himself merely as the steward of goods which belonged to the poor and took particular care to keep his good deeds secret, so as not to lose the heavenly reward (cf. Matthew 6:7). On three occasions he secretly left gold enough for the marriage portions of three maidens whom their debt-ridden father intended to give up to prostitution. When the man eventually discovered his good deed, Nicholas made him promise, as he valued his salvation, to tell no one of it.
God recompensed him through the charismata and miracles for which he became renowned in the sight of men. On pilgrimage to the Holy Places he twice by his prayer calmed the winds that imperiled the ship he was sailing in.

Soon after his return, an angel made known to the synod of bishops, meeting to elect a shepherd for the nearby city of Myra, that they should choose Nicholas—which they did, to the joy of the people. During the last great persecution under Diocletian and Maximian (c. 305), Saint Nicholas was thrown into prison where he continued to confirm his spiritual flock in the faith. With the accession of Constantine, he was very zealous for the destruction of idolatrous temples and for driving out the demons that inhabited them. Among the Fathers gathered at Nicaea in 325 for the first Ecumenical Council, Nicholas was one of the leading champions of Orthodoxy against the impious heresy of Arius, which had so swiftly sprung up to trouble and divide the holy Body of Christ.
He saved the city of Myra from famine by appearing to the master of a vessel laden with corn, and telling him to discharge his cargo at the harbor there. Later the man of God saved the lives of three Roman officers unjustly accused of conspiracy, by appearing in a dream to the Emperor Constantine and to he perfidious Prefect Avlavius. Full of gratitude to the Saint for their deliverance, the three soldiers became monks.

On many other occasions after his death as well as during his lifetime, Saint Nicholas has miraculously assisted ships in distress and people making voyages, and so is venerated as the protector of all who sail the seas. Thus, one day during a gale, he appeared at the helm of a ship in distress and brought it safely to port; and on another occasion, he rescued a passenger who fell overboard crying, “Saint Nicholas, help me!” and at once found himself at home surrounded by his astounded family.

For many years the holy Bishop was, as the presence of Christ, a friend of man and good shepherd to his faithful; there was no misfortune that would not move him to compassion, no injustice that he would not redress, no discord that he would not allay. Wherever he happened to be, his illumined countenance and the atmosphere of radiant peace surrounding him were instantly recognizable. When he fell asleep in peace his people lamented the loss of their pastor and their providence, through whom they had received so many benefits, but the angels and Saints rejoiced with great joy to receive the meek Nicholas among them. His holy relics, placed in a church built in his honor at Myra, were venerated by crowds of pilgrims every year. One day the Devil, unable to tolerate the glory that shone from Saint Nicholas’ tomb, took the form of a poor old woman and accosted some pilgrims who were leaving for Myra, lamenting that she was not able herself to travel, and entrusting them with a flask of oil for the lamps that burned perpetually before the shrine. During the voyage, Nicholas appeared to the ship’s captain and told him to throw the oil into the sea. No sooner had he done so than the surface of the water caught fire and swirled about in blazing eddies to the terror of the passengers, who gave thanks to God for having saved the sanctuary through his Saint. In 1087, after Myra had fallen to the Saracens, the holy relics of Saint Nicholas were transferred to Bari in the south of Italy, accompanied by many miracles, and there they are venerated to this day (cf. May 9).

Saint Nicholas, with Saint George, is one of the Saints most beloved by Christian people in the East as well as in the West. The churches dedicated to him are as countless as the places and the faithful named after him. He is especially revered by the Russian people as the protector of crops, and in the West he is regarded as the patron of schoolchildren and of young people in general.
Adapted from The Synaxarion: The Lives of the Saints of the Orthodox Church, Vol. 2, compiled by Hieromonk Makarios of Simonos Petra and translated from the French by Christopher Hookway (Chalkidike, Greece: Holy Convent of the Annunciation of Our Lady, 1999) pp. 332-335.

St Nicholas is a sacred place where relationships with one another are cultivated in the love of Jesus Christ. In the earliest days of our faith, Christians spent their time in learning from the apostles, taking part in fellowship, and sharing in the fellowship meals and prayers. Fortunately, this continues to be true for us today as we gather together to celebrate our commitment to Christ and His church. The St. Nicholas Community is about being present with Him in whatever joys, challenges, and realities we face together. It is where we find our strength and identity through love, acceptance, kindness, and humility.